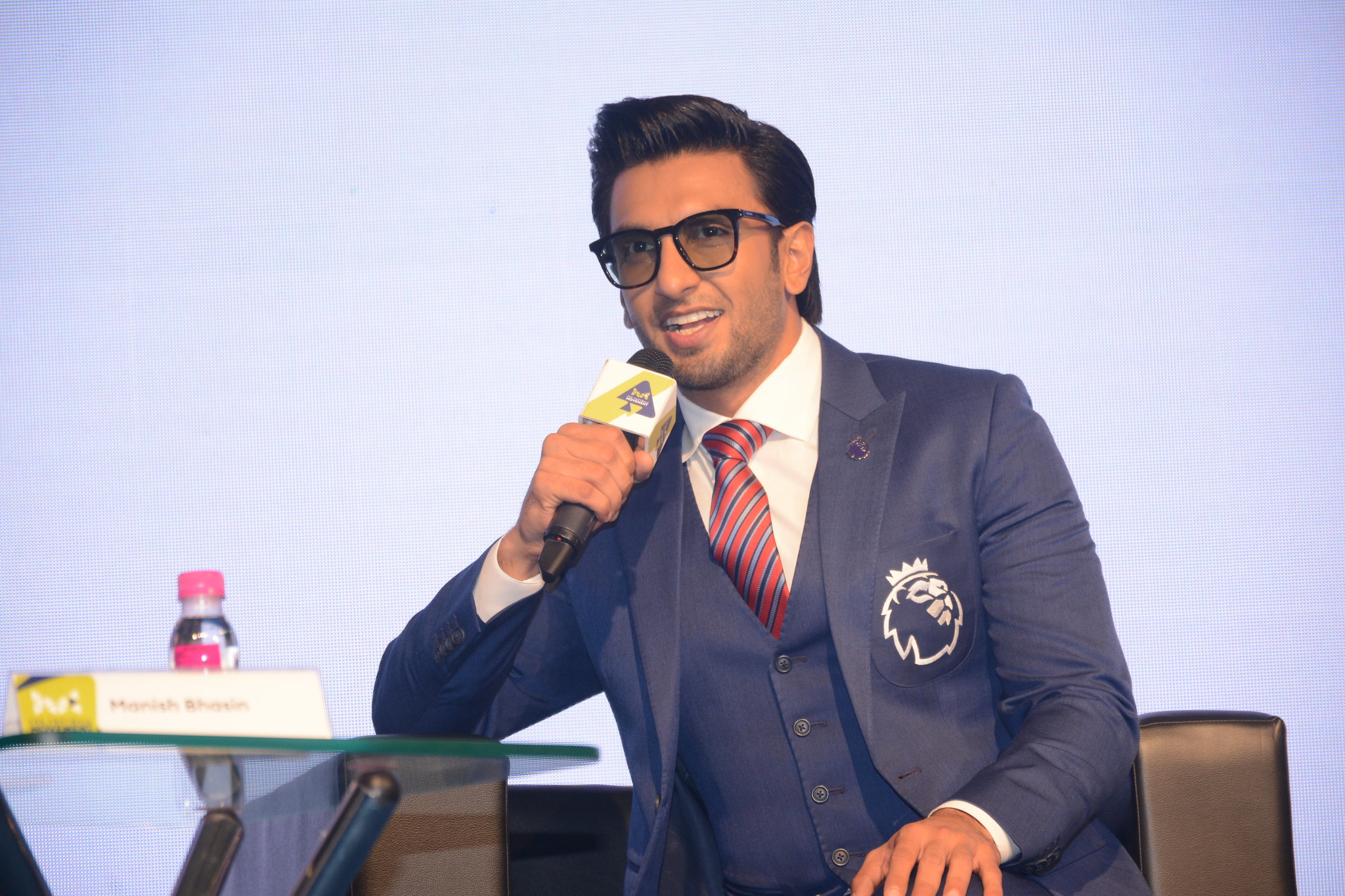 The Rambo of Bollywood has just grown with time. Slow start but a ranging pace in career, and no looking back from there is what Ranveer Singh’s life had been. Coming from a basic and non-acting background, he has proven his qualities, passion, and acting flair many times. Today, he is known as one of the finest actors of Bollywood with his works in Bajirao Mastani, Padmavat, and many others. Prior to popping into acting, Ranveer has worked as a copywriter in a few ad agencies. But, his desire to be an actor made him pop into the movie Band Baaja Baraat, and Bittu Sharma stole our hearts. Didn’t he?

His work was so appreciated that he won a national award for the film. It clearly illustrated that he would just excel in his profession in the future. Then hits after hits and works with director Sanjay Leela Bhansali showed not just his versatility in terms of acting but his affection towards his spouse Deepika Padukone. The two fell in love on sets of one of the movies Mr. Bhansali was directing. And the two tied the knot in November 2018.

As per the DOB of Ranveer Singh, his zodiac sign is Cancer. However, his Moon sign is Aquarius. And he possesses the qualities of both the zodiac signs in all means and manners. From feeling scenarios to the core to have a practical approach towards life, Ranveer Singh has the right personality to be the “life of the party.”

Ranveer Singh’s horoscope says that he is a logical person inclined towards hard work and big aspirations. Along with being proud of his profession, he believes in being ambitious and grabbing the right opportunities that come his way. Being under the influence of the planet Saturn or Shani, he is pretty serious about his profession. 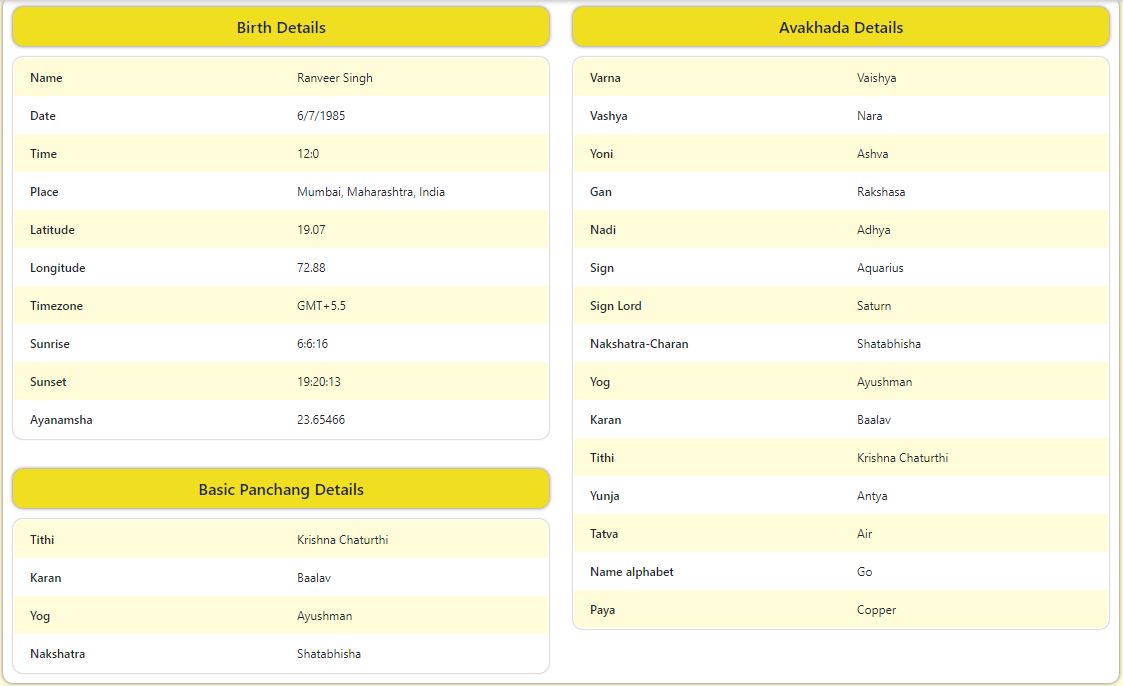 Having Virgo as ascendant lord, courage and independence are inborn in him. It may seem that he is a bit unorthodox in his doings, but he just appreciates what he is fond of. Such traits and non-ending appetite of growing up and grabbing success with hard work and craving for passion, Ranveer Singh is not just successful and famous, but also a sensitive and generous being.

Saturday isn’t just the last day of the week. It is also the day for the planet Saturn. Ranveer Singh was born on July 6, 1985, and is a Saturday person. He holds a vital position in their family, the ones you call the “center of attraction.” They might face struggles in life. However, the natives will be practical, straightforward, and steady.

Ranveer Singh‘s birth chart also shows that he is a big craver of things. However, he believes in earning with discipline. He is a trendsetter and a perfectionist in all aspects of his life. It might seem that Saturday ones would be sort of a direct hitting personality, but they are not. In fact, they are shy and sentimental folks.

Not just this, he also has a big heart and is very selective in choosing a partner, says the natal chart of Ranveer Singh. When, in love, he sees no bounds and takes immense care of his spouse, not ignoring the proof. With involving extra affections, he also holds a considerate approach towards his close people and family.

Born under the Satabhisha Nakshatra, Ranveer Singh is a person who believes in care and healing. He beholds vision to be successful in life and is pretty rational and practical about his decisions. Also, he is a man of philosophy and cares strongly about each like and dislikes he possesses.

Moreover, folks born with Satabhisha Nakshatra are a person of hard work and determination. Excellent and career-oriented, the power of intuitions is high in natives with this Nakshatra. They would also have appreciable skills and a deep bent over the professional life they have.

Seen the charismatic personality of Ranveer Singh? Owns superbly sharp and appealing looks, right? Thank his Nakshatra. He has impressive features and optimistic facets towards love, life, and other aspects of life too. Also, from Ranveer Singh’s birth chart, you can see he is very methodical in his life and emphasizes being up-to-date. Sharp memory and presentative skills are just more add-ons that Ranveer Singh owns with Satabhisha Nakshatra in his personality.

There are multiple Yogas in Ranveer Singh’s birth chart. They are:

Seeing to Ranveer Singh’s Kundali, Mangal Dosha or Kuja Dosha is not in his chart. He is Non-Manglik. In fact, the placement of Mars in his Kundali is actually very auspicious. It makes him an efficient person with impactful working and managerial abilities. Love from family and innovation and versatility in his traits is what Mars provides him with settling in this position in his natal chart.

According to our astrologers at AstroTalk, actor Ranveer Singh is in the best phase of his professional life, holding some eye-pleasing projects. He would rock the box office with all his upcoming movies. The major focus for the year is on the movie “Rocky and Rani Ki Prem Kahani” starring Alia Bhatt opposite him.

His married life will do great. If the actor pair wishes to plan a baby, the coming few months shall be auspicious and wonderful. He shall add immense romance and firmness in his married life. The couple would enjoy blissfulness and complement and support each other in making wise choices regarding projects in the months coming. Excepting some favourable transits, the horoscope foretells that by the year’s end, he will only attract success and various ads in his bag. However, he might have to make some necessary changes to uplift the profits and do well ahead. But, in all, it’s more like a win-win thing for him in his horoscope.

The actor needs to see through the glass and take care of his health. There are few aspects in the end months of the year which might lead him to a downfall of health, nothing major though. But, as the year ends, things shall be all normal and well-maintained. He can even expect some positive changes coming, according to his requirements and wishes.

An interesting chart isn’t it? Keep checking the blogs on AstroTalk to have some more on the Celebrity Birth Chart Analysis!